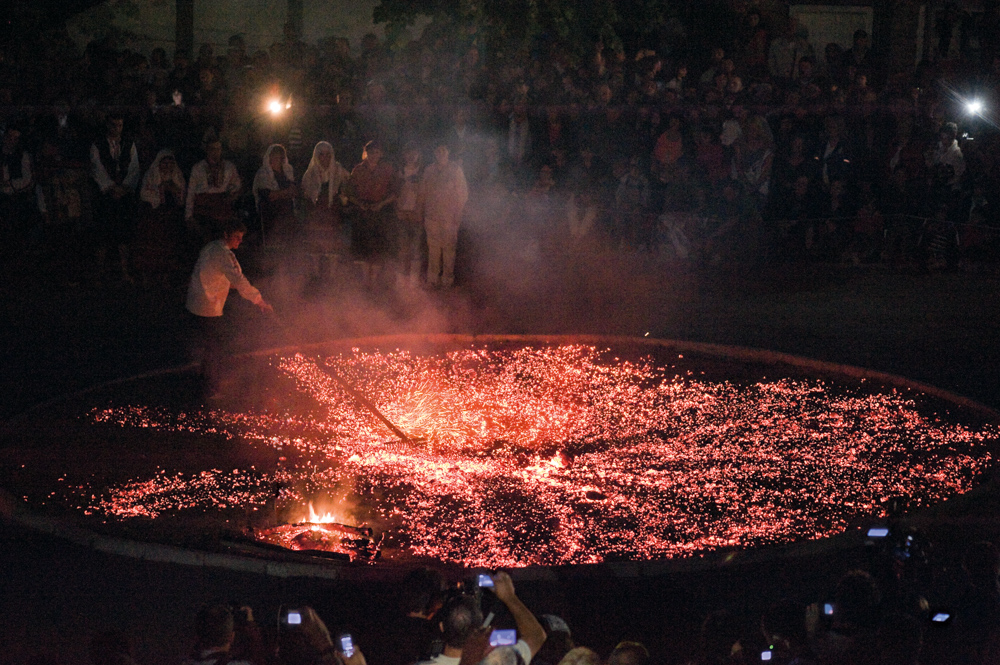 The unusual, almost Native American-like drum rhythm and the bagpipe tunes echo over the silent crowd, gathered around a large circle of live embers glowing into the night. All eyes are on a tiny group of barefoot men and women in traditional clothes, who dance slowly at the edge of the circle, holding icons.

“They are in trance,” says one of the onlookers.

“No, they are afraid,” whispers another.

One of the barefoot women raises her icon and, howling “Vuh, vuh, vuh,” enters the fire. Her feet move expertly, stepping firmly onto the embers. She walks, waves the icon, makes one, two, three circles, then crosses the fire twice. The other follow: their icons, too, raised high, their feet, too, onto the embers. The fire dancers come and go, some leave soon, others persist, the drum and the bagpipe repeat again and again their simple yet mesmerizing melody, until the last of the nestinari leaves the fire.

The dances of nestinari, or firewalkers, have been the staple show of “traditional” restaurants targeted to foreigners on the Bulgarian Black Sea side since Communism. There is a place, however, where the genuine nestinarstvo is still alive, although inevitably adapted to the changing times. It is the village of Balgari, in the Strandzha, where on the night of 21 May nestinari dance on the day of St Constantine and Helena.

No one knows when fire dancing appeared in a handful of Bulgarian and Greek villages in the Strandzha. Ancient sources mention fire walking priests of this or that deity in the 1st-3rd centuries, but in Italy and Asia Minor. The earliest records for nestinari in southeastern Thrace are from the 19th Century.

At that time, firewalking was a rite spread around the Strandzha. It was practiced in several villages, and although its name is Greek by origin, it was done by non-Greeks, too. Nestinari were mostly women, and they danced on living embers not only on the day of St Constantine and Helena (whom they thought of as a husband and wife), but also to saints like John the Baptist, Elijah, and Marina. Nestinari were revered as people with special powers, and everyone obliged the prophecies they made during their fire dance. “It is almost a sect,” a witness wrote in the early 20th Century, “although they don’t want to proselytize.”

The icons of the saints, which were said to protect the nestinari, were kept in special chapels outside villages. They would stay there, adorned with “clothes,” for the whole year. When their feast day came, a band of three unmarried and un-engaged boys would take them out and, followed by the village’s nestinari, a bagpiper, a drummer, and the villagers would bring them to the local sacred spring. People would spend there some time, praying and lighting candles, then the procession would return to the chapel. The icons, the nestinari, and the musicians would spend the rest of the day there, preparing for the fire dance. Meanwhile, the oldest non-practicing female nestinarka in the village would prepare the fire and the embers.

In the evening, the procession would gather again and head to the embers, for the last part of the rite, the firewalking and the foretelling. This went on for decades and centuries, if not for longer. The Balkan Wars of 1912-1913 and the exchange of populations in the 1920s changed nestinarstvo, or anasteria as it is known in Greek, forever. Greeks from the Strandzha resettled in other parts of continental Greece, bringing the rite there, most notably at the village of Langada, near Thessaloniki.

In Bulgaria, only three villages preserved the rite – Balgari, Kosti, and Brodilovo. Communist Party apparatchiks persecuted nestinarstvo as a “dark superstition.” In the 1950s, the rite survived only in Balgari. In the 1970s, however, historians started reevaluating the historical heritage of the Strandzha as the last stronghold of culture and beliefs of the ancient Thracians. Interest in nestinarstvo intensified. Scientists saw it as a Thracian rite, devoted to the Great God and the Great Goddess in a Christian guise. About the same time, commercial nestinari started to dance in seaside resorts.

It was only in 1990 when the original rite was reestablished in Balgari.

For many, the most astonishing part of the ritual is how the nestinari survive the embers. No reliable explanation has been given by scientists, but old nestinari believed that St Constantine and Helena were protecting them. None would enter the fire without their icon, and every burn was interpreted as a sign that the injured had sinned.

Curiously, the Orthodox Church never objected to this obviously pagan ritual. Unlike so many old rites, it did not denounce it as the work of the devil. Not a priest in the Strandzha dared to say anything against the nestinari. Otherwise, he would be chased out, if not worse, by his own parishioners.

In 2009, nestinarstvo was listed by UNESCO as a non-material heritage of world significance.