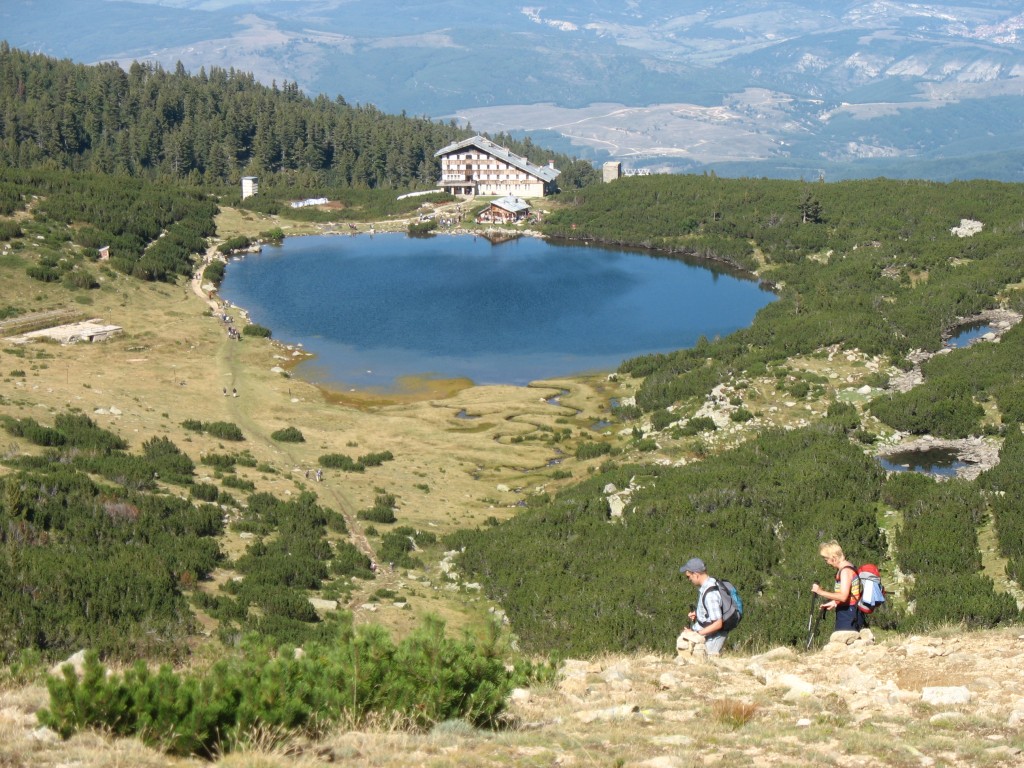 As I scrambled over the last mounds of scree, I could hear the sound of laughter wafting through the mist from the summit. A pillar of rocks, held in a wire cage, loomed out of the gloom as cold air buffeted my face. At the top, there was indeed a party, a French one, where cider and cheese were being consumed in vast quantities. Well, it was lunchtime.

But Mt Vihren, despite being 9,500ft high, isn’t in the French Alps or even in the Pyrenees, but in Bulgaria. It’s the country’s second highest mountain and the most dramatic peak among many other contenders in the wild Pirin range, offering some of Europe’s finest hiking. Greece lies 30 miles to the south and Macedonia 20 miles to the west. They say that on a clear day you can see the Mediterranean, but that wasn’t going to be the case today.

During the 3,000ft ascent, I’d noticed a party of students making heavy weather of the climb. When the slope flattened out into a meadow strewn with wildflowers, they flung themselves to the ground with cries of pain that echoed around the national park. “We’ve been up all night talking and drinking rakia,” said Gerasim, “and we’ve forgotten to bring our boots.” But they had remembered their cans of Zagorka, the local beer. Bleary-eyed and with aching limbs, they trudged on to the top in the 30-degree heat. An hour later a distant line of stragglers etched against the grey slab of rock showed that their hangovers had diverted them from the route, up the forbidding face of the mountain. I hope they were all right.

Thanks to the former communist regime, it’s actually hard to get lost trekking in Bulgaria. The authorities had reckoned that walking was good for the communal soul and went to great efforts to create paths in areas of scenic beauty. So established routes with waymarkers in red, yellow, green and blue still exist, and along with them, a selection of hizhi (huts), kind of totalitarian youth hostels, where it costs just a few leva to stay the night.

I dragged myself into Vihren hut and tucked into the canteen’s heart-warming bob (white bean and thyme soup) and lashings of grilled chicken and salad. Then night fell and I realised just how rudimentary my accommodation was. Despite the fact that I had my own room, the bunk bed was rickety and the mattress less than clean. It also stood in a grandstand position to hear the techno music that some young Plovdiv campers decided to play on a continuous tape until the early morning.

But the next morning shines bright and clear. South of Mt Vihren lies three glacial tarns – Muratovo, Ribno and Okoto – held in a rocky embrace by an amphitheatre of rugged, snowy peaks. Here geraniums, gentians, orchids and harebells painted a continuous patchwork of colour against the emerald backcloth of succulent grass – all part of a unique ecosystem that is host to rare flora. Exotic butterflies were forever drifting past, while horses had chosen this charmed spot to linger in the sunlight, flicking their tails at the flies, or chase one another through the splashy streams. No wonder it’s been made a World Heritage site.

Bulgaria is known for its winter skiing and for its raucous Black Sea resorts, but the summertime serenity of these soaring granite peaks and tumbling waterfalls remains something of a secret. Having so far avoided the hammer blow of mass tourism, the country’s environmental movement is determined to preserve these pristine, pesticide-free landscapes.

A family on a day out from Sofia had Muratovo lake to themselves. Dimitar and Vasil, father and son, proudly showed me the three trout they’d caught, and invited me to join their picnic. “But why do you decide to come to Bulgaria?” asked Teodora, Dimitar’s wife, as we sipped her homemade loganberry tea, the water lapping at our feet. The answer, of course, was all around us. Bulgarians love their landscapes, but they still find time to run down their country in all sorts of ways. They should treasure their Arcadias instead.

On the way up from Bansko lie a couple of highly prized tourist sites. The first is said to be Bulgaria’s oldest tree, a pine, estimated to be 1,300 years old. It was not that tall but had managed to spawn a small forest all around it. A few yards away stood a chilling monument to some botanists who had fallen off Mt Vihren searching out the elusive edelweiss on its dangerous crevasses.

The next day, while waiting for the clouds to clear, I decided to visit the Dancing Bears Park at nearby Belitsa, a joint project of the Brigitte Bardot Foundation and an Austrian conservation group, designed to stop the horrific abuse of performing brown bears. In this, it has succeeded so that the barbaric sport no longer exists in Bulgaria.

Four-month-old cubs used to be placed on glowing embers to force them to dance on their hind legs to music. Later a ring and chain are put through their nose, their claws pulled out and teeth filed down; the wounds are cleaned with vodka. At the opening of the sanctuary five years ago, 24 bears still performed in this way; now all of them are being cared for and receiving psychiatric treatment. But so severe is their trauma that it is too much of a risk to release them into the woods to join the country’s 1,000 or so wild bears. Experts say they will turn on, and kill, any human being they see. One can hardly blame them.

As soon as Charlie saw us he started his mindless swaying to and fro – a pure Pavlovian reaction and the saddest dance you’re ever likely to see. Up the hill, Kalinka and Gosho, more content following their rehabilitation, play-boxed while we watched spell-bound – and close to tears – through the protective electric fence.

Bansko, with its bars, discos and good restaurants with live music, is a fine town for chilling out. Set on the river Glazne at the foot of the Pirin range, its museums are a testimony to the resistance shown by these tough mountain people to the Ottoman invaders. Three days before, Ivan the terrible driver had met me off the narrow gauge railway that snakes up from the hot plains below and propelled me to the Hotel Avalon. Even at that late hour, James, the English proprietor – a striking resemblance to Antony Worral Thompson and a chef to boot – was ready with a warm welcome.

Some twenty miles north lie the Rila Mountains, where the walking is on a par with that in the Pirin Mountains, but because you start out at a lower altitude it’s a long stroll up before you get above the tree line to the sweeping vistas of Mts Maljovica and Lovnica. Persevere, however, and you’ll come to the glorious Seven Lakes. Go there the last weekend in August and you could bump into the Danovisti sect, who dance and sing in rituals that bizarrely blend paganism, sun-worship, Christianity and faith-healing.

Play at being a cenobite and stay in a cell at the ancient Rila monastery, which despite being Bulgaria’s most visited monument, still offers tranquillity once the coachloads have left. But be prepared to be ripped off by the monks, who may feel they can charge an exorbitant price for a bare room with only cold water. A while ago locals were charged a fraction of the price for the same kind of accommodation. According to some tourism professionals, the dual pricing practice still goes on, despite being against the law.

Rila Monastery is a special spot for Bulgarians as it was here that the Orthodox religion was preserved during centuries of Turkish occupation. The nearby Drushliavitsa restaurant serves fine fresh trout: pick the right table and you can have the stream running under your table. In the evening it became so cold I went back to the monastery to fetch a blanket from my bed. But the security guards, who must surely have one of the world’s most unstressful jobs, leapt into action. As they approached the table it became clear they weren’t happy. “They’re saying you must not steal monastery property,” said the waiter.

I was called to the monks’ office where Brother Anton reprimanded me. Chastised, I returned to my cell, shivering and penitent. But, despite my shame, this time, the sound of the river rushing by lulled me into a dreamless – and techno-free – sleep.