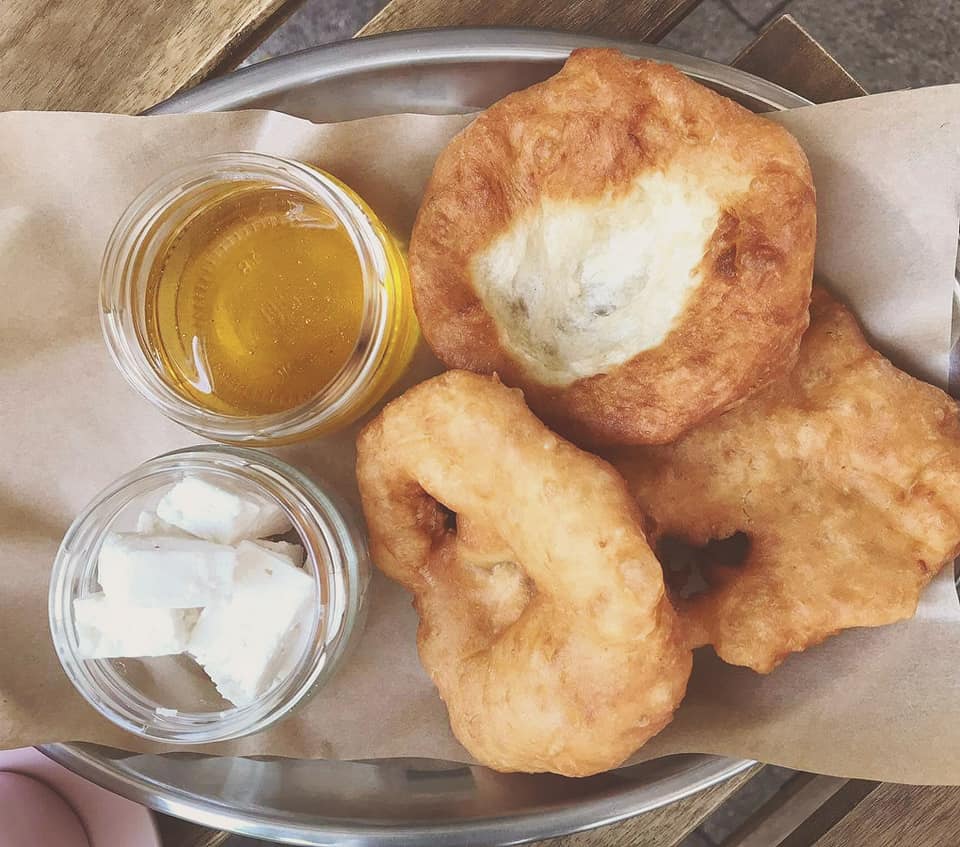 As any visitor to foreign lands knows, there is a tendency to play it safe when it comes to eating native. Most prefer to stay out of harm’s way at inviting-looking cafés and restaurants with Latin letters or at least pictures. However, by sticking to this practice, they will be missing out on a tremendously tasty part of Bulgaria.

Bulgarians are on-the-go eaters. Walk down any high street, and you’ll see a suited-up executive, banitsa in one hand, a mobile in the other; or a pack of teens munching on ice-creams. The choice for quick and easy street eats is abundant. It’s not just plentiful though, it’s cheap – considerably so – when you tally up the added extras of restaurant eating, such as the main dish, garnish, bread, sauces, drink, and the obligatory (some may say) tip.

Yet the prospect does seem daunting for newcomers to the country. Kebab or hamburger kiosks have extensive lists of the grub they proffer, but these are all in Cyrillic. One solution is to peer through the windows, where you’ll see trays of salads, such as ruska, a mix of potatoes, peas, carrots, and ham, topped with mayo; snezhanka, a mix of kiselo mlyako – or sour milk or what in the West is known as natural yogurt – cucumbers and dill; or a potato or egg salad mix, alongside breaded ham or cheese, hot dogs, kebabcheta, kyufteta, or meatballs, and other inspired-looking sundries. You could try using the point-and-gesture method, although busy Bulgarian vendors often tire of this communication commonly practiced by foreigners. A less demoralizing approach is to observe a few clients before you and just ask for the same as what they have by saying “sashtoto, molya.” This is only truly rewarding to the palette if you don’t join the morning hordes who tend to stick to a simply toasted filiya, or a long slice of bread, spread with lyutenitsa, a tomato-and-pepper paste.

Once you have mastered these kiosks, you can mix and match your snacks to try different fillings every time – for example, printsesa – a slice of bread covered with meat mince and squashed down in a grill, or dzhob, which literally means “pocket” – a double-folded thin round bread stuffed with kyufteta, kashkaval and a mix of salads, seasoned with mayonnaise or ketchup, all for just 2-3 leva.

Another rewarding mix-and-match option is the ever-popular dyuner, which is how the Bulgarians call the doner kebab – wrapped kebab, which can include meat, rice, chips, various kinds of salads, yoghurt, and chili sauces. One reason for picking up one of these laden treats after a night on the tiles is that they include elements of the four food groups – even if slightly imbalanced.

You could of course choose a slice of pizza, which is the easiest option for those still at the pointing stage. Pizza choices come with toppings such as mushroom, sweetcorn, bacon, and salami, and one slice, probably as large as your head, costs as little as 1.50 leva. One popular fast-food choice that doesn’t come recommended, however, is the world-familiar hot dog. Although apart from pizza, it is the easiest snack to request (pronounced “hot dog”, with a hard “H”), this had better not make it your first choice. You often receive more bread than sausage, which is just as well, as this breed of sausage can hardly pass for meat. It’s more like pulped chicken bones mixed with salted cardboard into a blancmange-like texture, encased in a plasticky skin.

Or there’s the simple and easy option of toast. Not the British-style buttered Hovis with jam or Marmite, but equally as delicious Bulgarian toast varieties. There are various types of grilled bread snacks which might include sirene, sausage, kayma, or mince, or a tailor-made mix.

Less typically Western options include the tantalizing array of Bulgarian-style bread and pastries. Such morsels can be found in wheel-along kiosks, small side-street shops, or little cafés. The most widely-known pastry is the banitsa, which is usually made from a mix of sirene, eggs and natural yogurt, layered up in oiled filo pastry, although you can get spinach, meat, or even pumpkin varieties. A very popular sight on the streets of Bulgaria is gevrek stalls. These rings of round, heavily toasted bread are often the first choice for on-the-go snackers nationwide, and come plain or topped with poppy or sesame seeds. One especially artery-shocking choice, which despite the cholesterol and calories should be tried at least once, is the ponichka – a doughy baked bread roll stuffed with sirene, fried off in oil, and offered with various toppings.

The high demand for pastries to go has been recognized by Hungary-born establishment Fornetti. The blue-and-orange signs of this franchise are popping up in every city and town in Bulgaria, and are being well received by the pastry-keen Bulgarian public, as well as by foreigners who appreciate the readily selectable bites on display. Each mini pastry is bite-sized, and you can buy them by weight or by how many pieces for as little as 20 stotinki per gram of product. Varieties include savory ham and cheese, spinach and feta, bacon, pizza and potato croquette; or sweet apple, berry, chocolate, or peach.

While we’re on the subject of sweets, you’d be mad to miss eating the ice cream in Bulgaria. Ice-cream stalls mushroom in the summer months, and are returning with wackier flavors each year to stave off competition. The more mainstream flavors incorporate public favorites such as banana, forest fruits, peach melba or brands like Bounty, Toblerone, Snickers, and Lindt. The intricate displays testify to this, with mountains of ice-cream balls piled high, pierced with chocolate bars or chunks of fruit according to their designated flavor. You can also get tubs or wafers of a more experimental flavor, such as walnut and fig, or, curiously enough, green orange.

It’s not just deliciously unhealthy food that makes eating on the streets of Bulgaria fun – it’s the healthy choices, too, which set the country apart from its Western counterparts. The prevalent healthy snack is sweetcorn, or tsarevitsa, due to its ability to teem along Bulgaria’s summertime plains. Delicious and refreshing corn on the cob can be bought for a mere lev from street-side vendors with large hot-water pans, and you add the salt yourself. Other innovative sweetcorn stalls sell pots of de-cobbed corn, for which you pay 50 stotinki for a topping of your choice, and these can be butter, yogurt, lyutenitsa, or, more interestingly, honey or chocolate.

Also utilizing the abundance of sweetcorn are the popcorn stands. Yet they don’t vend the maple syrup or buttery version, but the tamer salted variety. High in fibers and low in fat and sugar, popcorn is the ideal between-meals solution for calorie-conscious snackers.

The mixed nut and seed booths are also common. They provide roasted and salted sesame, sunflower or pumpkin seeds, and cashews, hazelnuts, walnuts, and peanuts all sold by weight. These booths are often surrounded by gatherings of men who, stopping to chat as they “eat” their snacks, build mounds of chewed and spat-out sunflower seed shells or pistachio shells around themselves.

When you pick up your Bulgarian street snack, do go native with the drinks too. Forego sugar-packed fizzy drinks, and instead get a bottle of one of Bulgaria’s mineral waters or ayryan. Ayryan is a mix of kiselo mlyako mixed with water and sometimes a dash of salt. Bulgarians swear by this miracle drink to cure hangovers, digestive problems, and various other niggles. For those who aren’t using it for medical purposes, the taste is a reason enough. Although it feels strange at first to be supping a savory drink, it is refreshing and complements a banitsa terrifically. Of course, we can’t mention Bulgarian drinks without bringing up the bean curd travesty that is boza. Speaking from a personal point of view, yet as someone normally very accepting of new flavors, I’ve yet to successfully palate this murky, brown drink.

Lest we forget the numerous coffee-vending machines. For your pocket change, you can quench your thirst or get a caffeine lift from these hit-and-miss drink vendors. It’s advisable to stick to the tried-and-tested ones on your route to work or through town, as some will reward you with a revitalizing long coffee with milk or hot chocolate, whereas others will provide a murky, dubious cup of mud.

To sum up, eating on the streets of Bulgaria is certainly something to explore and – if you strictly avoid the little shops that would sell you yesterday’s banitsa wrapped in plastic – enjoy. Do remember – boza is only for the brave!