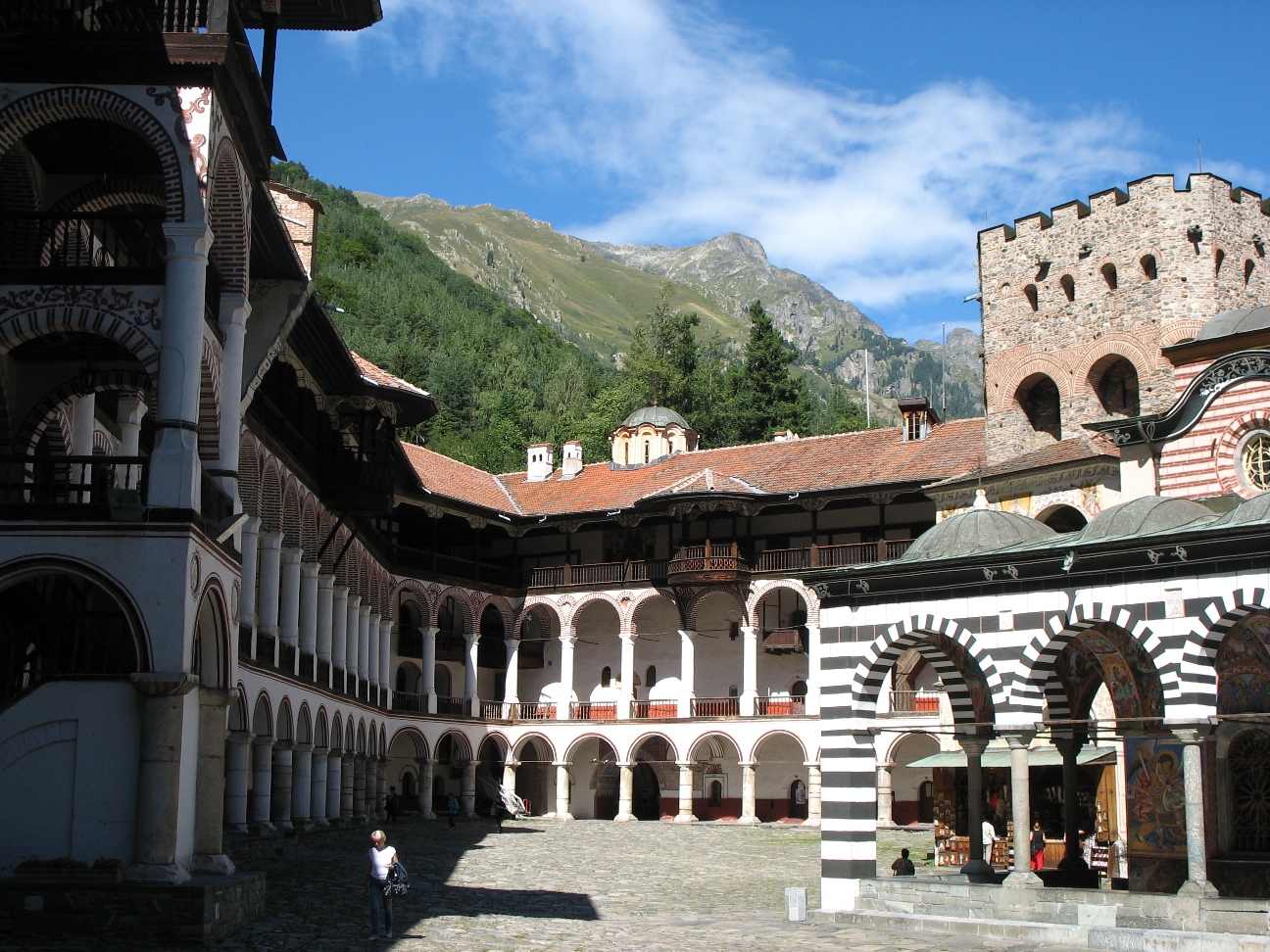 Black-and-white striped arches, technicolor murals of saints and sinners, and high mountain peaks filling the horizon: a visit to Rila Monastery is one of Bulgaria’s most memorable experiences, and not only because of its UNESCO World Heritage Site status. This place unites stunning landscapes, spirituality, formidable art and architecture, and some interesting stories. It is hardly a surprise that both Bulgarian King Boris III and Irish journalist James Bourchier wished to be buried here, in 1943 and 1920 respectively. The tomb of the monarch is inside the main church, Bourchier lies outside, close to the main gate. Rila Monastery has also left its mark on literature, from Bulgarian poet Ivan Vazov, to John Updike and Elizabeth Kostova.

Rila Monastery is today – and has been for centuries – a treasure trove. Mighty walls were built to protect its riches, and medieval Bulgarian kings and wealthy Bulgarians made lavish donations to it. The main church, The Holy Mother of Christ, was painted by the best artists of the 19th Century, including the famous Zahariy Zograf. Today business is big, too, with hotels and restaurants springing up around the complex, and sellers of kitschy souvenirs both inside and outside the arched gates of the monastery.

Ironically, the place that has accumulated these earthly possessions was founded by a man who wanted anything but strong walls, full treasuries, and the attention of the powerful.

It was St Ivan of Rila who founded the monastery, became its patron saint, and gradually was accepted as the saintly protector of all Bulgarians. He lived on the cusp of the 10th and 11th centuries, a fateful time. Bulgaria was large, famed, and feared, as the result of the imperial and cultural policies of King Simeon the Great, but his constant wars had exhausted the country and, when he was succeeded by his heir, King Petar, Bulgaria, and the Bulgarians entered into a decline. The poor became poorer, the rich richer and the elite increasingly copied the lavish lifestyle of the archenemy, Byzantium.

The disappointment and dissatisfaction of the ordinary Bulgarians were channeled into two spiritual movements, both of which cherished frugality and piety, and despised the vanity of earthly possessions, but were radically different from each other. The Bogomils were a dualistic sect that believed all earthly power, civil and religious, came from the Devil; the only way to avoid damnation was to abandon traditional society and live in simple, poor communities. The Asceticism movement did not object to the social order; its adherents just chose to live alone, with their prayers, in some deserted place. That explains why, while the state and the Church persecuted the Bogomils as heretics, the hermits were not only left alone but were venerated as spiritual leaders.

Ivan of Rila was such a man. Born in an ordinary village, he led an ordinary life until his parents died, when he was 25 years old. Ivan then gave up all his property and became a monk, eventually ending up alone in the high and deserted Rila mountains. The fame of his piety grew and spread, and even King Petar took the trouble to travel all the way from Preslav, the then capital, in the north-east, to visit the hermit. Ivan of Rila would not agree to meet the king and only showed himself from a distance. Of all the lavish presents that Petar had brought, he accepted only the fruit and refused the gold.

Even in the 11th Century, however, living a simple, godly life was not easy. Before long the hermit found himself amid a growing community of followers and was forced to seek solitude farther up the mountain. There he died, supposedly in 946, at the age of 70. Marking his abode today is a small chapel. The monastic community that sprang up in his initial place of habitation turned into Rila Monastery.

The hermit was canonized soon after his death, and in the following centuries, his supposedly miraculous remains traveled around Bulgaria. In the 1180s they were notoriously stolen during a Hungarian raid and brought to what would later become Budapest. They were only returned to their rightful home, with much pomp and ceremony, as late as 1469. They are now in the monastery’s main church, exhibited for veneration in an elaborate wooden casket.

There are some details of the life of Ivan of Rila (or the legends about it) that are not that well-known. The hermit is said to have subsisted on a diet of herbs with the aim of embalming himself while still alive. Some stories depict him as notoriously bad-tempered. He would curse whole villages for refusing to give him food or shelter, and caused the death of his young nephew. The boy had decided to become a hermit and joined Ivan. When his angry father reclaimed his son, Ivan of Rila asked God to save the young boy from the woes of earthly life. The nephew never reached home, as he was bitten by a snake and died on the way back.

The sanctity of St Ivan of Rila lingered through the centuries, attracting a never-ending stream of donations to Rila, until it grew to be the largest monastic complex in Bulgaria. The earliest surviving building in the closely guarded monastic courtyard is the Hrelyu Tower, a defensive structure with its own small church, built-in 1335 by a local aristocrat. The rest of the monastery must have been mighty and stunning, but it was destroyed in a devastating fire in 1778. The restoration took about 20 decades, during which time, in 1833, a section of the new building was lost to another fire.

This was how and when the strong walls that protect the monastery and the living quarters appeared, soon to be complemented by the striped galleries and the exquisite main church covered inside and out with frescoes shining blue, green, red, and yellow, like jewels scattered under the sun. The smell of old wood lingers in the courtyard, blending with the aroma of burning wax and incense from the church, and the fresh air from the mountain. Sadly, the abbot does not allow access to the galleries, from where the beauty and architectural harmony of the complex can better be appreciated.

Spirituality and beauty aside, Rila Monastery also provides an informative experience of Bulgaria’s distant and more recent past. The monastic library preserves books from the 11th-19th centuries. Among its most precious documents is the Rila Charter, issued by Bulgarian King Ivan Shishman in 1378, which still bears his gold seal. The document specifies the properties of the monastery and how it should be run, making it a precious historical source of life in the 14th Century. The monastery museum is predictably rich in icons and other ecclesiastical objects. One exhibit stands out: the Cross of Monk Rafail. Made from a single piece of wood, it is 81cm high and is covered with 104 religious scenes containing 650 figurines. The cross was finished in 1802, costing its creator 12 years of his life, and his eyesight.

A more poignant story is found in the church itself. In the misty light of one of the naves, a simple cross marks the resting place of King Boris III. Bulgaria’s last acting monarch (his heir was too young and regents ruled instead) died in 1943, soon after he returned from a meeting with Hitler in Germany. Boris III was buried in Rila Monastery, but his remains did not stay there for long. Fearing that his grave would become a place of pilgrimage, the Communists exhumed the corpse in 1946, and reburied it in the former royal palace of Vranya, on the outskirts of Sofia. Then they exhumed it again, and what happened next is not exactly clear. After the collapse of Communism, in 1989, only the embalmed heart of the dead king could be found. It was reburied in Rila Monastery, in 1993: yet another poignant tale about earthly power and humility, as Ivan of Rila, the hermit, had preached.