The natural phenomenon is at the end of a potholed road that twists and turns for 16 km west of Road 86, the main route that connects Smolyan in the Rhodope with the wider world. The area’s peaks are dark green with firs and the deep valleys are white with streams, a picturesque cover of karst core, the result of millions of years of volcanic and tectonic activity.

Both the over- and the underground, the seen and the hidden, meet at Chudnite Mostove, or Wondrous Bridges, at the foot of Golyam Persenk Peak (2,091 meters above sea level). There, among the green and above the white, rise two huge arches of grey marble.

The larger bridge is almost 100 meters long, 15 meters wide and the highest of its three arches rises to 45 meters above the ground. The second bridge is a 30-meter high tunnel that runs for 60 meters before ending with a narrow opening. There, the rivulet that runs under both bridges disappears into the karst rock. It reappears 1.5 km downhill.

The meeting of two worlds is not only visible but also audible: the rumble of the tiny river turns into an echoing growl under the bridges.

Everything is amplified here, bar the people who downsize into ants. Amazingly, the reason for the Wondrous Bridges’ existence is also tiny. This is the small rivulet. For millions of years, it has carved its way into the 600-million-year old marble. First, it created caves, huge caverns of echoing darkness unseen by anyone. Then, an earthquake struck. The caverns collapsed, but the stream continued to flow, carving, dissolving, and taking away boulders, while rain, sun, and wind-carved their art on the ever-expanding openings in the former cave, and first settled on its surface.

This was how the Wondrous Bridges appeared.

The local legend – because of course, there is a legend about the place, has another explanation. It involves a dragon and a donkey.

Unlike in the West, Bulgarian dragons are rather benevolent creatures. Each village used to have one, a protector that took care of harvests and the general population’s wellbeing. Dragons of competing villages would even fight in the sky, creating illuminations and anxiety among the people watching from the ground. These magical creatures required continuous respect for themselves and the places they inhabited (caves, old trees, even dolmens). They would punish breaches of proper conduct with spells of dry weather and other farming misfortunes. All in all, people and dragons cohabited peacefully, in a mutually beneficial symbiosis. The only danger was for beautiful girls. No, it is not what you might expect. Bulgarian dragons were amorous creatures, but this made them no less dangerous. When a dragon fell in love, his craving would start to fade and ultimately die. Or he could abduct the object of his amour and make her the mother of winged children.

The problem with the dragon that created the Wondrous Bridges was different. According to a legend told by locals at the nearby Zabardo Village (do visit, the village claims the authorship of the oldest ferries wheel in the world, which was made of wood), the local dragon developed an unsavory appetite for… sheep. Well, it was not humans at least, a Westerner might object. But sheep were the livelihood of the local economy for centuries and the people of Zabardo could not take it anymore.

So they decided to get rid of their dragon. Instead of calling for strong men eager to face the monster, they devised a cunning plan. They loaded a donkey with tinder, set the tinder on fire, and rushed the animal to the dragon’s den. The dragon was delighted and devoured the Trojan donkey without giving it a second thought. It was too late when the dragon felt the fire burning inside him. He rushed towards the stream and dug himself into the ground, but he could not extinguish the fire… His giant corpse, buried in the ground, finally rotted and disappeared. The marble arches of the Wondrous Bridges are the only trace left of him.

When standing under the grand arch, one indeed might feel lost in the bowels of a prehistoric monster. The feeling will hardly last for long, especially in summer when tourists abound.

In recent years, and in spite of the bad road, the Wondrous Bridges have seen a rise in visitors, tourist services and infrastructure. Besides the old tourist chalets, there are taverns, stalls of locals selling pickled wild mushrooms, wild strawberry jam, and all types of rakiya and wine. Parapets were built on the bridges, to provide safety and, rather controversially, steps were carved in the stone to facilitate climbing. And there is the alpine trolley. For a 20-leva fee, you can “fly” for 250 meters trough the grand arch, hanging on a rope. 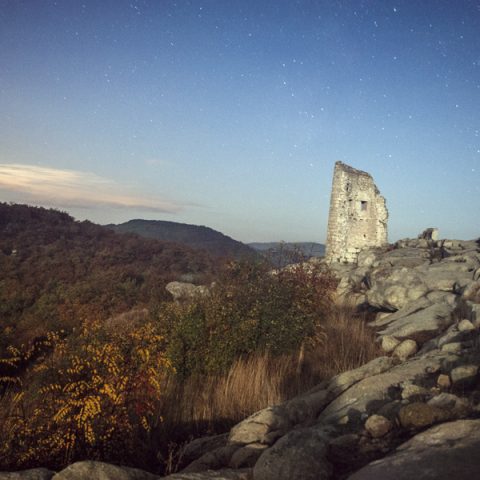