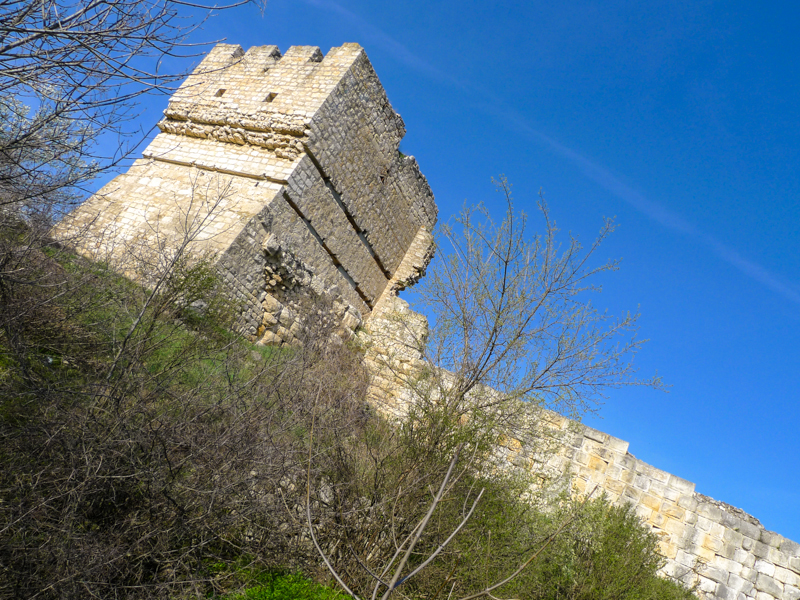 Cherven is one of the most interesting and authentic fortresses in Bulgaria. Perched on one of the precipitous meanders of the Cherni, or Black, Lom, a few kilometers from Ruse, the fortress sprawls among the grey stones of the canyon and the spring greenery. Its most spectacular element is a three-story defense tower, which is an original construction and has nothing to do with the fake fortresses which are built by the dozen nowadays.

The Cherven tower may look familiar to you, and for a reason. In the 1930s, it was used as the model after which the almost completely demolished so-called Baldwin Tower on Tsarevets Hill, in Veliko Tarnovo, was reconstructed.

The fortress at Cherni Lom grew from the humble remains of an earlier Thracian settlement, in the 6th Century. Back then, new peoples were invading Byzantium via the Danube. The empire tried to stop them with mass fortifications, the forts on the Danube were strengthened and new ones sprang up along the main roads leading inland.

Cherven was one of these. Sitting atop an 80-meter-high hill, it was heavily defended with strong walls of huge quadrae, or rectangular stone blocks. However, the empire soon lost control over the Danube Plain and emerging Bulgaria took over the territory, along with the Cherven fortress.

The fortress evolved into an important administrative, religious and economic stronghold much later, in the 12-14th centuries. It was a true medieval city, with fortification walls and massive towers. Merchants and craftsmen crowded the steep, narrow streets of the residential quarters and the feudal lord lived in a citadel with his soldiers, clerks, and family. Hidden behind high walls, his palace included a beautiful church and was surpassed in size only by the palace of the Bulgarian kings at Tarnovo, the capital. About a dozen other churches catered for the spiritual life of the inhabitants of Cherven and in 1235 the city became an episcopal center. This tradition continues and even today the title of the bishop residing in Silistra includes Cherven as well.

Life in the fortress, however, presented a problem which the inhabitants had to confront daily, and which became even more acute during wars and sieges. It was a lack of water. The river was right below, but not a single well existed inside the fortress. The inhabitants of Cherven built and meticulously cared for several reservoirs, and also carved a very narrow and very steep stairway leading down to a place where hidden within a tunnel, there was a secure spring. This is the only construction of this type preserved in Bulgaria and you can still climb up and down the stairs just as the medieval citizens did.

In spite of all the walls and turrets, there were times when Cherven could not be defended. The fortress was taken by the Tatars in 1242 and by the Byzantines during the reign of King Ivaylo (1277-1279). In 1388, the Ottomans conquered it, too.

The new masters of Cherven appreciated its strategic position, and the city remained an administrative center of the empire for several centuries. Gradually, however, the trade on the Danube proved more important for the empire and the city of Rustchuk (now Ruse) developed near Cherven. It expanded and attracted settlers and soon most people had left the fortress. Those who decided to stay around old Cherven moved out to the more easily accessible hills around, forming the core of Cherven village.

The Cherven fortress is popular with Bulgarian tourists, but you will hardly find yourself competing with other visitors while exploring the ruins of the feudal citadel, the bishop’s church, or the three-story tower, or marveling at the vistas from the fortress walls.

Once in Cherven, there is more to explore roundabout. A few kilometers away is the Rusenski Lom nature reserve, a patchwork of canyons, karst rock formations, and dense forests. Here, in fact, it is even easier to relive the spirit of the age when medieval Cherven was alive, as in the caves around the Rusenski Lom River are the remains of several rock monasteries. Scattered around Ivanovo, they still preserve vivid frescoes, which have earned them the status of a UNESCO World Heritage Site.

There are several fine guesthouses in the area, which make the environs of Cherven ideal for a short break from the big city. Even if you are a devout nature lover, a visit to Ruse, the city which “drained” the life from medieval Cherven, is recommended. In the 19th Century, it became the focal point for the Europeanisation of the Bulgarians and its liveliness and Art Deco façades are in sharp contrast to the solitude and pristine beauty of the ruins of Cherven.