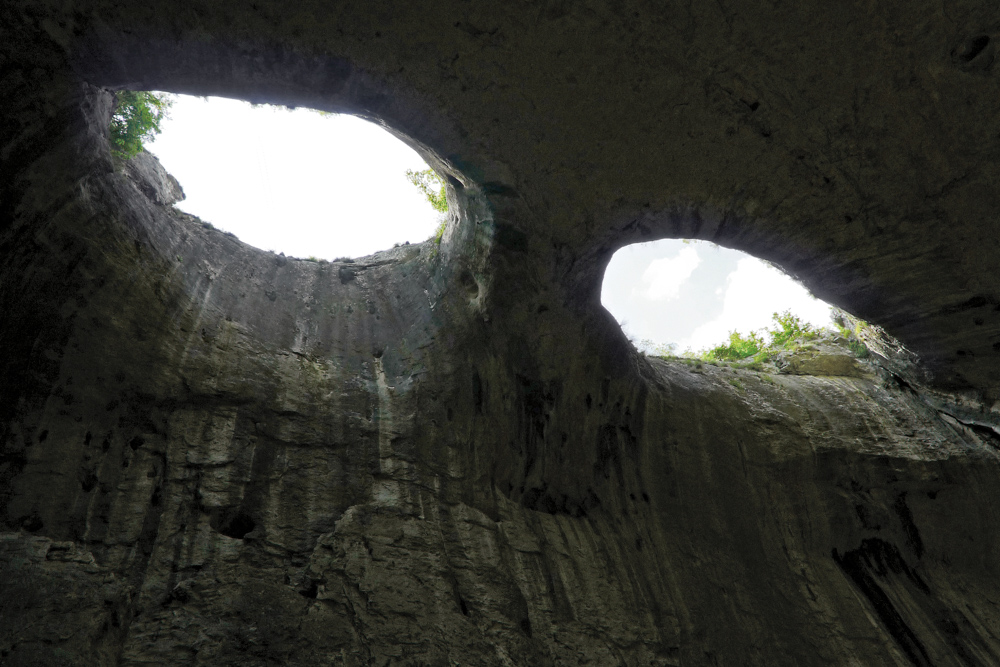 When you see Karlukovo, near Lukovit, for the first time, you’d be hard put to believe that you are in the part of Bulgaria richest in karst rocks. The settlement lies among low, monotonous hills and there’s nothing – not even a signpost pointing to a tourist sight to indicate that underneath this modest landscape lies a labyrinth of caves. It is the result of thousands of years of action by wind and water, which carved the pliable karst rock and formed caves, magical shapes, and whirlpools.

The 600 caves around Karlukovo almost outnumber the villagers. For thousands of years, the locals have been used to living near the caves, some of which were inhabited during the Neolithic Age.

Today some caves are incorporated into the yards of village houses. So accustomed are the villagers to their caves that they have never bothered to devise exotic legends about how the caves came into being – they named them after real objects or happenings, not poetic yarns.

One of them is the Dog’s Cave, which got its name from the villagers’ habit of throwing dead animals and mad dogs into its 27-meter-deep abyss. Some of the dogs would survive, however, and begin to feed on the decaying carcasses around them. The animals would howl, either insane with their own affliction or out of fear, and the echo would amplify their cries, projecting them far away from the cave trap.

The Ovcharkata, or Shepherdess, Cave was named because the shepherds used to gather their sheep in its mouth. When darkness fell, treasure hunters used to explore its galleries in a vain search for treasure.

The cave called Mandrata only received its name relatively recently: between 1957 and 1967 it was used as a dairy by the local collective farm.

Among the people most familiar with the merits of Karlukovo and its caves are Bulgaria’s spelunking enthusiasts. Nearly a kilometer away from the village, where the seemingly ordinary hills end abruptly in the Iskar River gorge, cavers have built an Alpine-style chalet. Its official name is Petar Tranteev National Cave Home, but everyone – speleologists, villagers, and tourists alike – call it simply Peshternyaka.

If you don’t mind roughing it, you can book a room in the hut for a token fee. You’ll have the added advantage of a great view of the Iskar River and the stunning rocks on the opposite bank, in which a round hole in a high cliff is the chief attraction. It is known as Provartenika and is entirely naturally formed.

For cavers, however, the hut is more than just a place to sleep in relatively civilized conditions while on an expedition to the nearby caves. In Karlukovo they received their first lessons in caving, and the most ardent ones have immortalized their experiences in a poem, “At Karlukovo, in the Cave Home.” Its first version dates from the 1960s, and although subsequent generations have adjusted the text according to their own experiences, the opening stanza remains the same:

At Karlukovo, in the Cave Home

The class was gathered, there on the balcony

To learn, perched on a rock

How to enter a cave

At Karlukovo, in the Cave Home

For unsuspecting day-trippers, however, the abundance of caves near Karlukovo has some perils. Each step off the beaten path holds the risk of falling into the overgrown mouth of a cave.

On the other hand, because of the absence of signposts indicating any sights near Karlukovo (nothing new for the rest of Bulgaria at all), you’d have to ask a local how to get to Prohodna, the most famous cave in the area.

Prohodna is 262 meters long, which makes it the longest cave gallery in Bulgaria. Both its domes are more than 60 meters high. The mystic atmosphere that surrounds it is due to two openings in the roof situated somewhere in the middle along its length. They are entirely natural and their astonishing shape resembles two wide-open eyes. The sunlight streaming in further enhances the dramatic effect. These two openings are known as the Windows or the Eyes of God.

Prohodna photographs well, which has led to it being frequently used as a film set. The cave was perhaps most emblematically put to use in 1987, during the filming of Division Time, a historical drama directed by Lyudmil Staykov and based on the novel of Anton Donchev. The film was part of the propaganda project that the Communist authorities devised to justify the so-called Revival Process in the 1980s. In the winter of 1984-5 the Communist authorities coerced the Bulgarian Turks into changing – “of their own free will” – their Muslim names into Christian and Bulgarian ones. The formal explanation was that these people were not Turks at all but Bulgarians who, during the Ottoman rule, had been forcibly converted to Islam. Division Time fictionalized incidents in this period of forcible change. In the film, the Eyes of God are featured in a scene in the final moments when, in the cold light beaming down on him, Father Aligorko realizes that Islam and Christianity are ultimately the same things.

Because of its fame, Prohodna is full of visitors during weekends. Nonetheless, its renown obviously failed to impress the local road builders, who sited the road that connects Karlukovo and Lukovit literally on one of its domes. If you miss the small sign that indicates the eastern entrance to the cave, it would never even cross your mind that you had just passed above one Bulgaria’s most imposing natural phenomena.

The hidden treasures near Karlukovo also include three rock churches: St Marina, St Gregorius, and Cosmas and Damian. These have frescoes from the 13th and 14th Centuries, some of them only partially preserved. There’s no need, however, for you to go to Karlukovo to see them, as the most important ones have been removed and are currently on display in the National Museum of History in Sofia. In any case, accessing these monasteries is nearly impossible unless you are both a mountain climber and a caver.

The church near Karlukovo that has been most successfully preserved is not housed in a cave. The church of the Assumption of the Virgin is part of Karlukovski Monastery. Located in the narrow gorge of the Iskar River, opposite Peshternyaka, the church is listed as a national heritage site. Partially dug into the ground, the 16th Century building has wall paintings that date from 1603, but because of the constant damp, they have begun to fade.

Although an asphalt road leads to the church, few people visit the shrine. It is open for tourists on weekdays, but hardly anyone is aware that it can be visited. The reason seems to be that nowadays Karlukovski Monastery is on the grounds of one of Bulgaria’s most widely known psychiatric hospitals.

There is a historical reason for this, as in the Middle Ages sick monks used to be sent to live in that monastery. In 1884 all monastic activities at the complex were ended and the entire compound was turned into a hospital, the church being the only building that survived the transformation. After 1944 the hospital was converted into a psychiatric asylum.

Since then the name of Karlukovo has been associated, at least in Bulgaria, more with its mental institution, popularly referred to as the Madhouse of Karlukovo, than with its numerous caves. This has led to new cave stories being added to the long list, for instance, the one about the inmate who escaped from the hospital and hid for two days in the caves nearby. And a popular story making the rounds in Karlukovo goes like this: a group of spelunkers passed by the hospital on their way to a cave and saw the patients looking over the fence. “Come have sun fun with us in the caves,” the spelunkers said. “Do you think we are mad enough to do that?!” the patients replied.