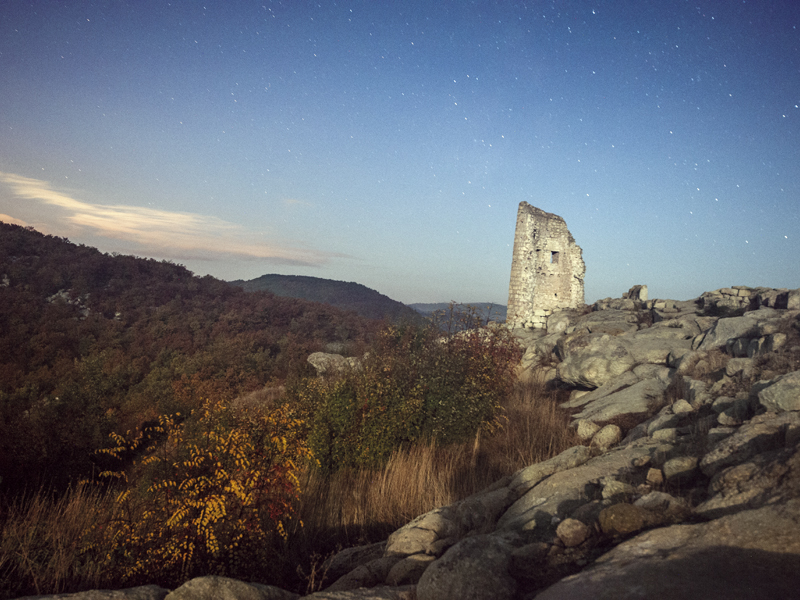 The priestess raised the gold bowl and the strong, dark Thracian wine in it reflected the light of the fire burning on the altar. There were only her and the nervous Roman officer standing in the oval-shaped roofless inner sanctum of the shrine of Dionysus, yet the place seemed filled with an invisible presence.

The officer swallowed his fear and moved closer to the priestess. Dionysus was about to reveal the future of his son, Octavianus.

The priestess closed her eyes and poured the wine over the fire. 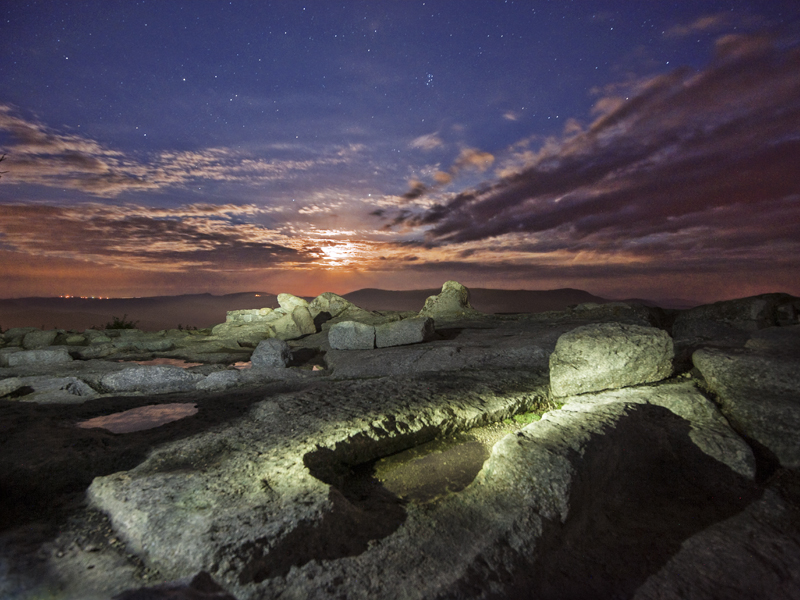 Remains of cult pits and graves in the bedrock. Perperikon was built on solid rock, so the bases of each building and even the graves were hewn in the stone

The priestess gasped, then smiled.

“What does that mean?” the Roman officer asked.

“Your son shall rule the world, just as did Alexander called also the Great,” the priestess said. “And it will happen. Three centuries ago, here, in this place, Dionysus foretold the same to young Alexander, and Alexander reached India.”

This was how, according to Suetonius, the fate of Augustus, the first Roman emperor, was foretold by the remote but famous Oracle of Dionysus.

The existence of a prestigious Oracle of Dionysus in the Rhodope is known from many ancient sources. The sanctuary rivaled that of Delphi, in both fame and prediction accuracy, and was controlled by the Satri, a Thracian tribe. Its ownership, however, was contested by other Thracians and the Romans meddled eagerly in these feuds, applying their Divide-and-Rule strategy. 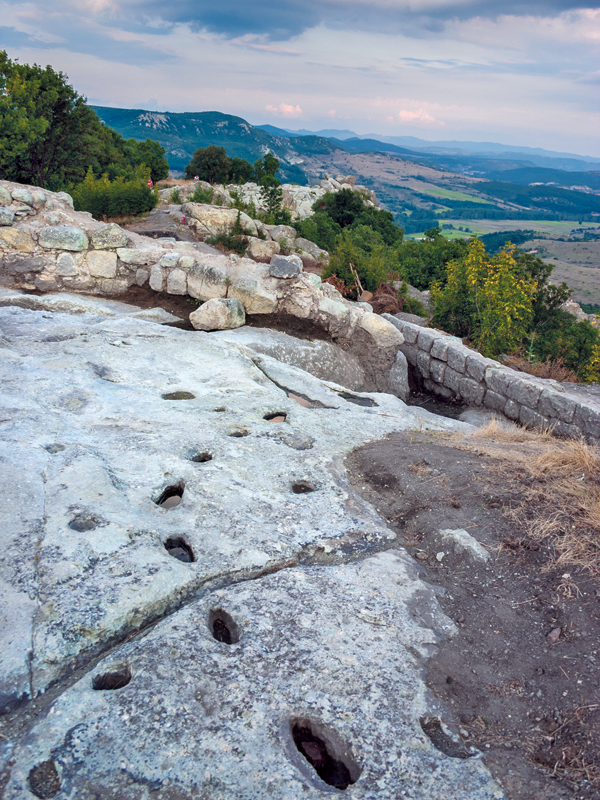 Deciphering the traces in the bedrock is not easy. Some believe that the pits covering the surface of Perperikon were only for ritual purposes. Actually, most were made to support columns of buildings or to store food and liquids

The exact location of the sanctuary is still unknown, but since the early 2000s, an archaeological site near Kardzhali has been actively promoted as the seat of the Oracle of Dionysus.

Rising 470 meters above the picturesque valley of the Perpereshka River, Perperikon is an arresting sight. The rocky hill is covered with woods that still hide remains of previous lives, but its top has been intensively excavated, revealing walls, stairs, cisterns, churches, palace buildings, a necropolis, and even the remains of a medieval fort. Covering more than 5 square kilometers, Perperikon is the biggest megalithic site in the Balkans.

The first people arrived here 8,000 years ago and carved the rocks so they could fill the crevices with fragments of pots as offerings to the unknown deities or spirits they believed in. Then these people disappeared from Perperikon. After a hiatus of about 1,000 years, at the end of the 5th and the beginning of the 4th millennia BC, the hill again became the focal point of religious activity. In the 18th-12th centuries BC, the sanctuary was already so extensive and famous that artifacts belonging to the Minoan and Mycenaean civilizations are now found there.

Perperikon experienced a decline in the 4th-1st century BC, but when the Romans took over Thrace, activity resumed and new buildings adorned the hill. In the 6th Century, however, Christianity took over and the sanctuary was abandoned. Unlike other pagan sacred places in the Balkans, Perperikon did not fall completely silent. 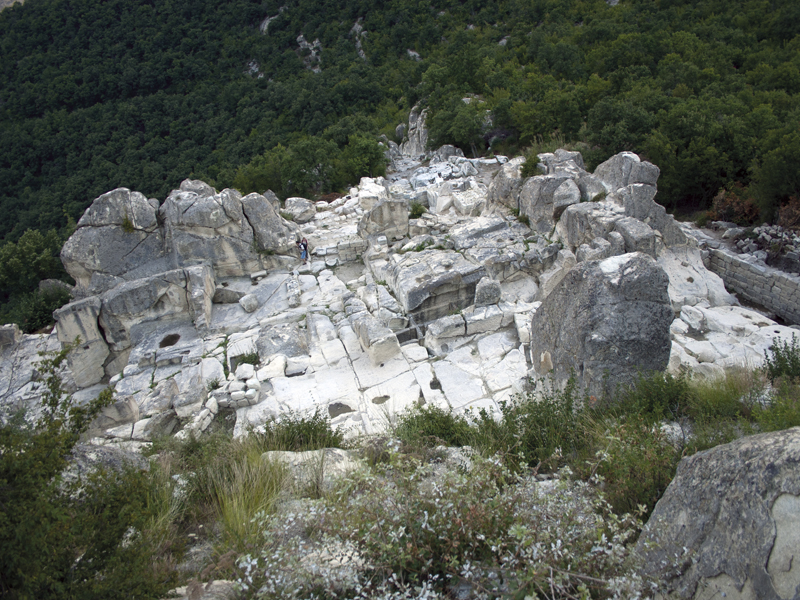 Christians moved into the empty shrines, built churches over them, and turned Perperikon into the stronghold of local bishops. It all came to an end in 1362, when the Ottomans invaded and people left Perperikon for good, leaving the hill to nature, which soon swallowed up the remains of the churches and the Thracian shrines.

The site was rediscovered by archaeologists in the 20th Century, but Perperikon only became a household name in the early 2000s, when excavations started again and the theory that it had belonged to the Oracle of Dionysus was promoted as a proven fact.

Archaeological research on the hill continues to this day and there is hardly a summer without some discovery announced to and happily swallowed by media. Interest is growing, with visitors counted in the thousands, yet the information at the official site is outdated and the tourist infrastructure is insufficient. 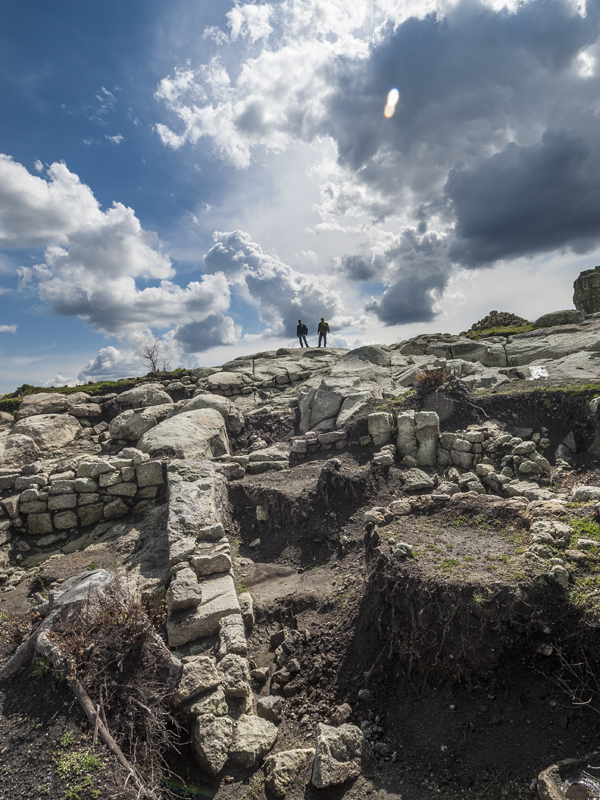 Each summer, archaeologists discover new bits of Perperikon’s past. Last August, they announced that they had found the horse of the Ottoman lord who occupied Perperikon in 1362. The animal was buried close to the tomb of its owner, which was discovered three years ago

Constant excavations at Perperikon mean that what you see on the hill is constantly changing. After an easy climb, you reach the lower end of the stone road which once led to the citadel. On both sides, it is guarded by high cliffs and now largely demolished walls. Once at the top, you pass by the oval-shaped “room” carved in the rock, the supposed inner sanctum of the Oracle of Dionysus. 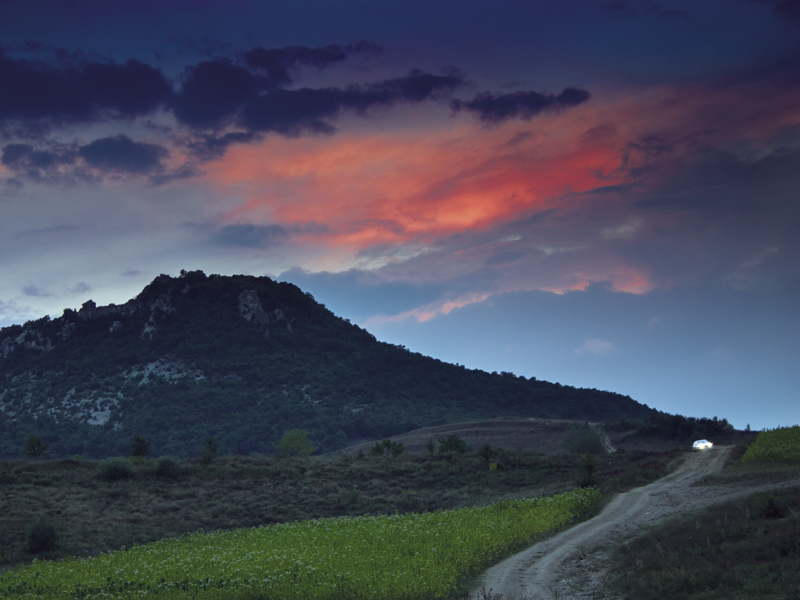 Perched atop a hill commanding the strategic valley of the Perpereshka River, Perperikon was both a sacred place and a strategic fortress

The most popular spot on the top of the hill is the so-called Palace Building, with its supposed throne hewn in its rocky wall. Tourists love to have their picture taken while sitting in it. Do pay attention to the tiny canal in the floor in the same room. According to some theories, it was used for astronomical observations.

The rocks all around are covered with oval, rectangular and circular pits hewn in the stone. Some of them were sacrificial or were used for the production of sacred wine, but others were used as storage spaces.

Further along the hill are the remains of an early-Christian basilica. A replica of its marble pulpit now stands on the site of the original, which is exhibited in the Kardzhali Historical Museum. Close to it is the ghostly remains of a monastic necropolis with graves excavated from the bedrock.

From here the remains of a medieval tower are visible, a picturesque addition to the scenery.

In spite of its popularity, however, Perperikon also abounds with lesser-known but interesting details. One is the faded graffiti of a shaman, carved into a rock between the Thracian shrine and the basilica. It was probably the deed of a medieval Bulgarian.