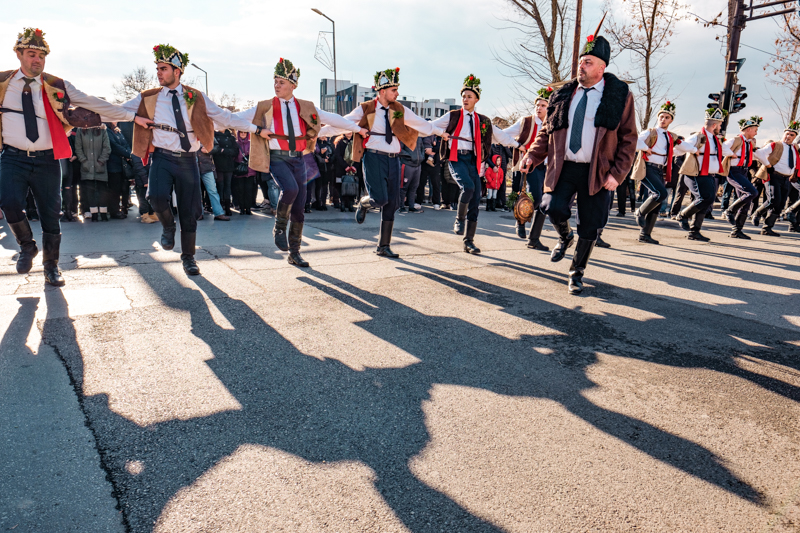 In the dull winter light of 25 December, the grey streets of Kargona neighbourhood in Yambol look drab as usual. This is a suburb of low houses and sidewalks blocked by parked cars, bare trees, dust and cheap stores, a defining feature of much of Bulgaria outside hipster cafes and flashy shopping malls in the big cities. Yet, come Christmas, Kargona is like nowhere else in Bulgaria. There are scores of people who would rather celebrate in the streets than stay at home and watch TV, overeat, engage in family arguments or try to mitigate generations-old feuds.

The people of Kargona are waiting for the men who greet Christmas, keeping an old tradition alive.

After 45 years of forced atheism and fast urbanisation during Communism, combined with the post-1990 influx of imported traditions via movies, media and merchandise, Christmas in Bulgaria is far from the traditions of the past. Long gone are the old rural rites created and repeated generation after generation that should greet the birth of the new sun and Child Christ, protect the communities from evil and secure prosperity in the households. The special log that used to burn through Christmas Eve in the fireplace is no more. Forgotten, too, are the elaborate blessings recited by the oldest woman of a household and the ritual of having dinner on the floor, so that the deceased members of the family could also partake. Few farmers, if any, bother to interrupt their Christmas Eve drinking and go into the garden, an axe in their hands, to ritually “threaten” the trees that have failed to produce good fruit in the past year. The only rite that still survives from this ancient and complex system of traditions is the requirement to have an odd number of lean dishes for dinner on Christmas Eve.

Until the mid-20th century, no Christmas was possible in Bulgaria without koleduvane. It was one of the rites that defined the high day, an initiation ritual for young men and a tradition that united the community.

To Western eyes, koleduvane seems not that different from the trick-or-treat of Halloween: a group of youngsters walk from house to house and receive gifts. There are differences of course. Koleduvane was reserved for boys and young men. No masking was involved. There was no trick part. The dances and songs of the groups of koledari were supposed to celebrate not death, but its opposite: the birth of Christ. They were expected to bring fecundity and good fortune, and chase away the demons that roamed free on Christmas Eve, when Christ was still a young baby in the crib.

In not-so-distant times, young married and single men would dress in their Sunday best, form small koledari groups and would gather at midnight on Christmas Eve. Then they would go around the village, knocking on each door, shouting “Christ is born, oh, Koledo!” and would sing and dance, wishing health to the household and the domestic animals, wealth and a successful harvest. The hosts would thank the koledari with sips of wine and rakiya, money, smoked meat, nuts, popcorn.

There was also round bread that the koledari collected on a long staff; it was a matter of honour to have your staff completely full of bread by the end of the night.

At dawn, koledari would gather at the home of their leader for a feast of the food they had collected. They would sell the remains, donating the money to the local church, school or some other charity.

Koleduvane survived well into the middle of the 20th century, with inevitable regional differences. In the western parts of Bulgaria, the koledari group would include a fake old man dressed in a fur coat with the fur outside, a fake crone dressed like a bride, and musicians. In the Thracian Plain, men would wear boots with spurs and clink them while performing a dance called buenek.

This is the tradition that people in Yambol flock to see at Christmas.

Like so many traditions that enjoy a surge of interest in the times of Facebook and hyperventilated patriotism, the Yambol koleduvane has adapted to the 21st century while claiming full authenticity. It is celebrated in a special, officially-sanctioned event, the Koledari Dance Festival. The groups participating in it are from both Yambol and neighbouring villages and compete for the best dance and song. The event is a day-long affair. Instead of round bread and bacon, the onlookers award them with applauses while producing thousands of photos and videos they later post on social media.

Yet, Yambol’s koledari remain close to their origins, a lively reincarnation of the ancient rite. Their clothes reflect the mixture of traditional and new typical for Bulgaria a century ago: baggy trousers and fur hats with high boots and neckties. Instead of staff, the leader of the band carries a sabre.

And there is the music. The heavy rhythm of the buenek dance, combined with the clink of spurs and deep male voices, still preserves some of the magic of the koledari, those long gone protectors from evil and harbingers of health, wealth and new life.