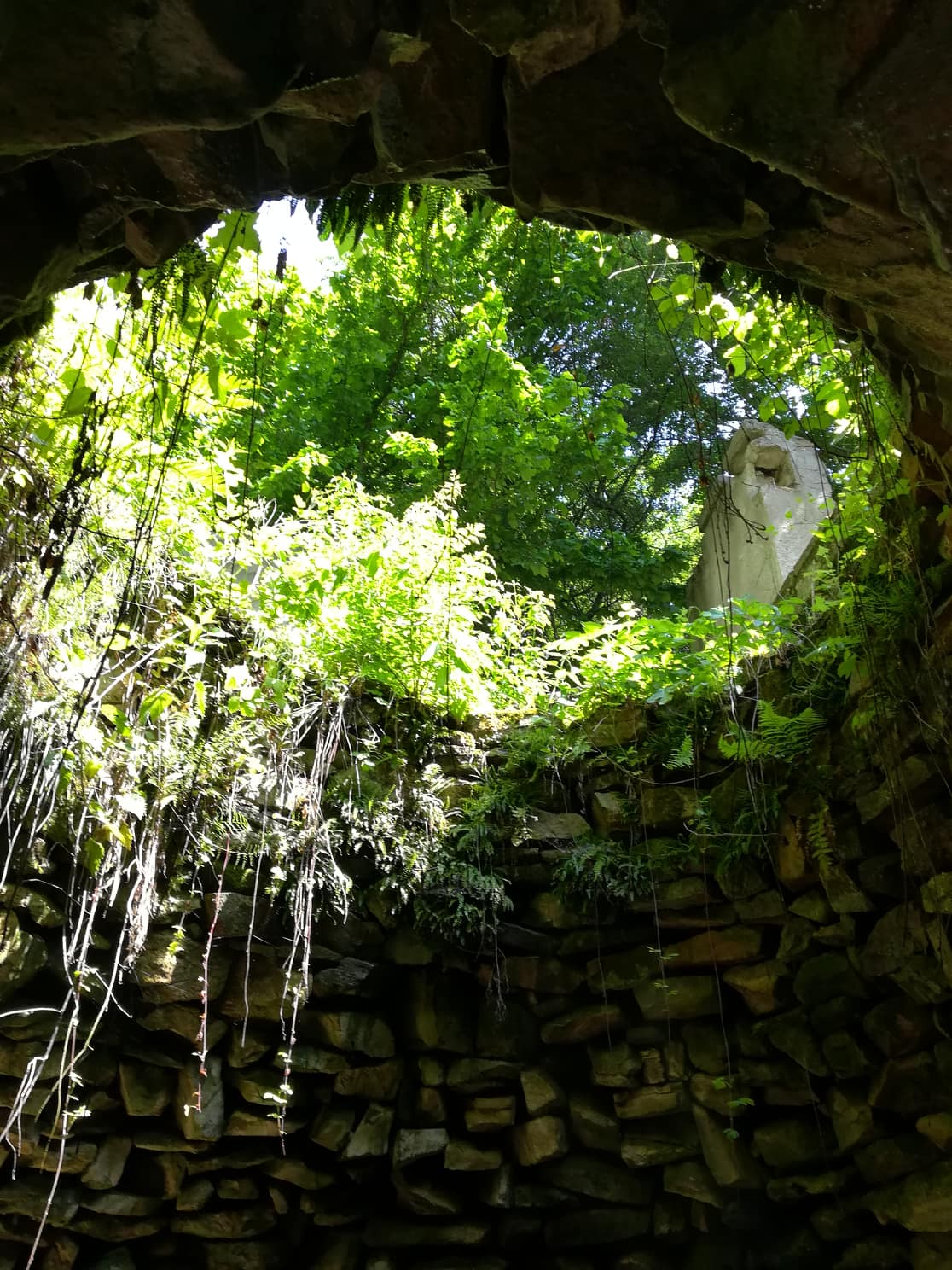 The massive stone crosses that centuries ago used to be the graveyard of Garlo village, in the region of Pernik, poke out from the undergrowth, a poignant sight that we have covered several times in Vagabond.

This time we are in this picturesque, atmospheric, and overlooked part of Bulgaria for another reason: to search for one of this country’s most enigmatic archaeological finds.

An hour’s walk from Garlo there is a site that defies explanation and stirs the imagination. The Temple Well of Garlo is a subterranean domed structure built of rough boulders without the use of mortar. It is accessible via a narrow, downward-sloping staircase. A 5-meter well gapes in the center of the chamber, under an opening in the dome. The structure has been dated to the 12th-11th centuries BC.

The path to the Temple Well is not marked and we soon discover that the how-to-get-there reports on the Internet are not quite correct. That is why we are so surprised when we finally reach the site: all the bloggers have somehow failed to mention that the ancient structure is inside a crumbling, modern building with a stair and a balcony. Among its dilapidated walls, the ancient Temple Well looks like an abandoned cellar and the stone steps leading to it appear new. 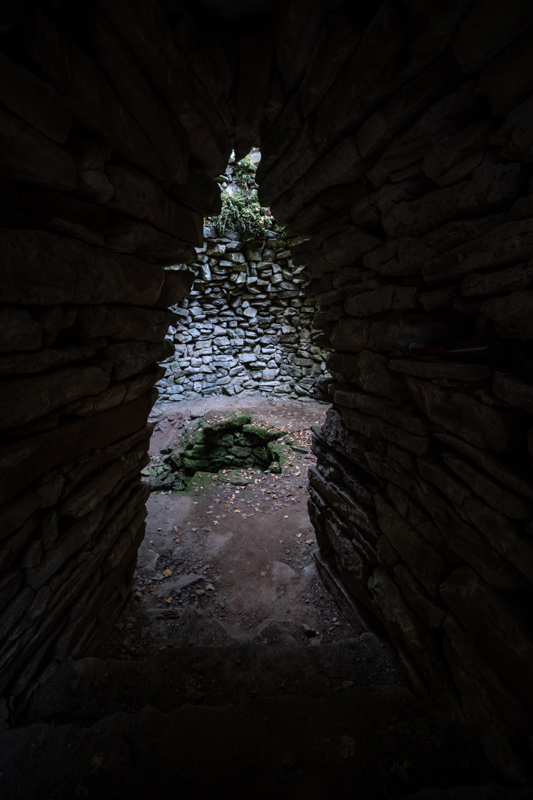 Bulgarians love overusing the word “unique,” but Garlo Temple has no analogs in Europe outside Sardinia

Are we being duped, we wonder. Such things do happen. Last year archaeologists surveying the prehistoric stone circle at Leochel-Cushnie, Aberdeenshire, Scotland, discovered that… a farmer had built the structure in the 1990s – only after the man himself confessed.

Garlo Temple Well is genuine. It was discovered by treasure hunters in 1971, and in the following year archaeologists took over. The modern structure was built to protect the ancient site, and in the 1980s restorers arrived.

After the democratic changes in 1989 and the ensuing economic hardships, funding for the proper care of heritage sites was scarce, and Garlo Temple Well was left to itself. The protective building collapsed in 2008, and the site lay exposed to the elements, while treasure hunters still “check it out” for hidden treasures.

The restoration was also far from perfect. Those responsible added a bend to the corridor, to make it more accessible to visitors and widened the opening in the dome.

Considering the shape of the tombstones, some claim that ancient Celts were buried in Garlo’s old cemetery

The few finds discovered during the 1972 archaeological digs, such as some animal bones in the corridor and the chamber, suggested that religious activity had taken place at the site. A small settlement existed nearby for centuries, making use of the abundant water sources. The well in the structure is the highest of those springs. Sometime in the 4th-5th century AD the people in the area closed the dome with massive stone and covered the whole structure with a mound.

They probably did this while Christianity spread over the region. Who built the Temple Well – and why – remains a mystery.

The ancient Thracians, who inhabited the Bulgarian lands and spent the 1st millennium BC building megalithic shrines and tombs, are the first explanation that comes to mind, but the architecture of their structures has nothing to do with the Temple Well of Garlo.

The archaeologist Dimitrina Mitova-Dzhonova, who excavated Garlo Temple Well in 1972, discovered the only similar structures as far away as Sardinia. That island is covered with the massive temples and citadels of the Nuragi culture, which existed between 1900 and 730 BC and is believed to be an offspring of the Mesopotamian civilization. Building on this and on the importance of water in the Garlo structure, Mitova-Dzhonova interpreted the site as a temple of the Sumerian god Enki, a patron of water. How and why people from Mesopotamia reached this part of the Balkans is anyone’s guess.

Studying architecture, other researchers have interpreted it as an astronomical observatory designed to measure the length of the year. They have even discovered carved symbols resembling the Roman numerals V and VI in the corridor that might have been used to measure time.

The Well Temple was hardly a tomb: no one would bury a corpse inside a water source.

HOW TO FIND THE GARLO WELL TEMPLE? 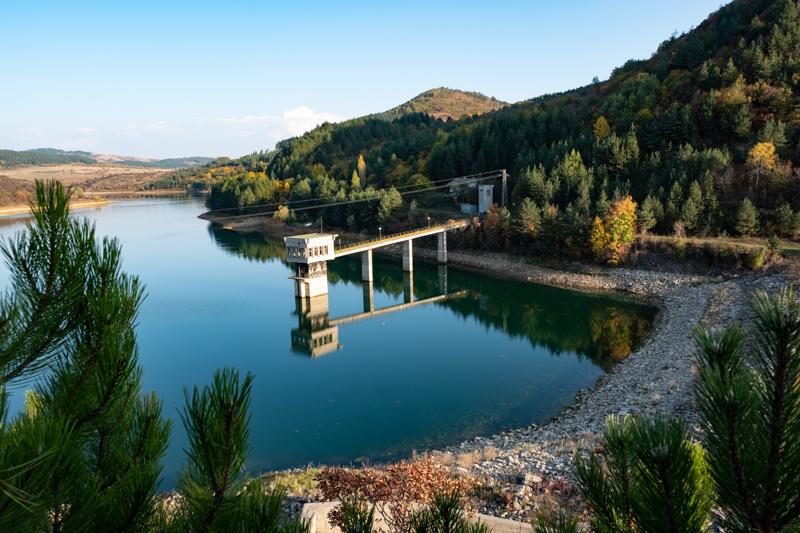 To reach Garlo Temple you need to walk on the wall of Krasava Dam. In theory, this is forbidden but no one will stop you

Once in the village square in Garlo take the street to the right. When you pass the church (on your left-hand side) drive onto the dirt road that diverges to the right. This will take you through the amazingly well maintained Staro, or Old, Garlo neighborhood and to the old graveyard. The dirt track continues, but if you do not have a high-clearance car it is wiser to park here and continue on foot. Follow the dirt track when it bends to the right and starts climbing up one side of a ravine. When you reach the wall of a small dam, ignore the No Entry sign and use it to reach the opposite side of the ravine. Cross the metal bridge. A narrow, twisty, rocky path starts from here. Take it, keeping the dam on your right. Two concrete pillars will assure you that you are on the right track. After the second one, the track enters a forest. Keep going, leaving the wire fence around the dam on your right-hand side. The path will diverge and you might feel lost among the thick brambles and the low branches, but whatever path you choose, you should reach a water catchment. Take the path to the left of it and start climbing the steep slope covered with a rather menacing forest. You will pass by some stone structures, visibly ancient, that might fool you into thinking that you are already at the temple. Keep climbing until you see the crumbling walls of the 1970s protection building. The ancient temple will be waiting for you, inside.